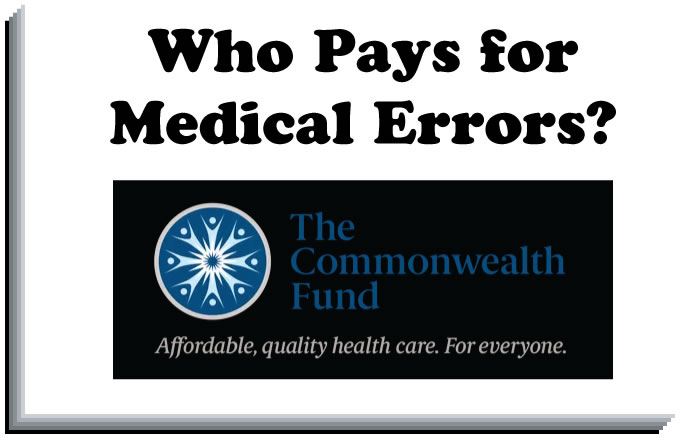 AN ANALYSIS OF ADVERSE EVENT COSTS, THE MEDICAL LIABILITY SYSTEM, AND INCENTIVES FOR PATIENT SAFETY IMPROVEMENT

In addition to the harm they cause to patients, medical errors are expensive: the Institute of Medicine has estimated that medical errors cost $17 billion to $29 billion per year. But since most of these costs are shifted to outside parties—often to payers, like Medicare—hospital leaders do not have strong economic incentives to improve patient safety, according to a new Commonwealth Fund–supported study.

Patient safety advocates have long sought to make a “business case” to demonstrate that if health care organizations invest in safer practices and systems, they will reap financial returns in the form of reduced malpractice costs and other expenses. In “Who Pays for Medical Errors? An Analysis of Adverse Event Costs, the Medical Liability System, and Incentives for Patient Safety Improvement” (Journal of Empirical Legal Studies, Dec. 2007), Michelle M. Mello, Ph.D., J.D., of the Harvard School of Public Health and colleagues tested this case by gauging the extent to which hospitals actually absorb the costs of medical errors.

The researchers started by looking at a previous analysis of Medicare claims data, conducted by Chunliu Zhan of the Agency for Healthcare Research and Quality and colleagues, and published in a 2006 Health Affairs article. It found that hospitals absorbed about two-thirds of the extra costs associated with adverse events and billed Medicare for one-third. However, the analysis only considered the costs associated with initial hospitalizations. Mello and colleagues, when designing their study, took into account all the costs that hospitals might be forced to bear through the tort liability system—inpatient and outpatient care expenses, lost income and household production, future medical expenses, burial costs for fatal injuries, and noneconomic losses (e.g., pain and suffering).

The researchers drew on data from 14,732 discharge records from 24 hospitals in Utah and Colorado in 1992. The records showed 465 adverse events due to medical management, including 127 events attributable to negligence, with an estimated total cost of about $439 million. The average cost per injury was $58,766 for all adverse events and $113,280 for the negligent injuries.

Mello and colleagues compared the costs associated with adverse events that were absorbed by hospitals, including malpractice insurance premiums and the costs of extra inpatient care they were unable to recoup, against costs that were “passed through” by hospitals to other payers.

While adverse events result in substantial costs, hospitals bear only a small proportion of these costs and therefore have few financial incentives to invest in patient safety interventions, the authors conclude.

Various payment reforms might help. For example, health care purchasers could recognize and reward hospitals that demonstrate better safety standards, building on the example of the Leapfrog Group, an employer coalition that directs employees to insurers that meet quality and safety standards. In addition, purchasers could refuse to reimburse hospitals for the costs associated with certain adverse events. The Centers for Medicare and Medicaid Services is leading the way, having recently announced it will curtail reimbursements for “never events,” identified by the National Quality Forum as events that should never happen, like surgery performed on the wrong body part.

While such reforms are important, the researchers suggest they will not be sufficient. Medical care costs are only a small portion of the total economic and noneconomic losses associated with adverse events. Legal reforms to allow more injured parties to pursue compensation could considerably bolster incentives for hospitals to improve safety. Today, only a small percentage of patients affected by medical errors actually receive compensation through the medical liability system.

In a previous Fund-supported study, Mello and colleagues suggest creating an administrative compensation system of “health courts,” which would make compensation accessible to a broader range of patients and, at the same time, help control malpractice costs by setting reasonable limits to awards. Health courts, the researchers argue, could also help to spur hospitals to take action. “By lowering barriers to both claiming and recovery of damages,” they say, “a health court system promises to direct a much larger proportion of the costs of avoidable injuries back to the involved providers and their insurers.”

Finally, the researchers call for further analyses to help hospital leaders evaluate the costs associated with medical injuries—and put a price tag on clinical interventions that could help prevent adverse events in the first place.