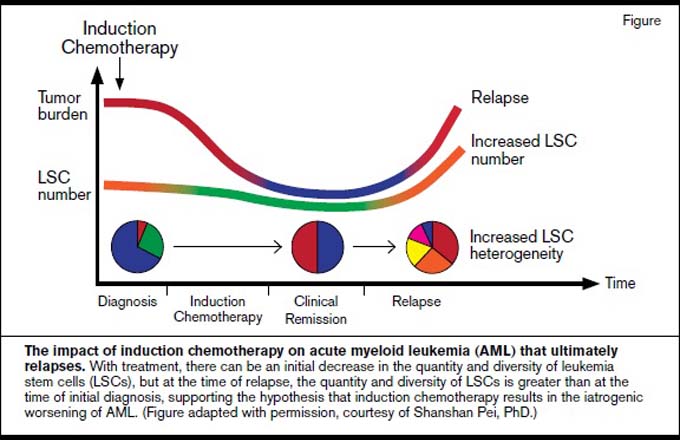 If the definition of insanity is doing the same thing over and over again and expecting a different result (just as the definition of a bad review article may be one that leads off with an old cliché), hematologists treating acute myeloid leukemia (AML) with intensive induction chemotherapy may need to seek psychiatric care.

To be fair, there are subsets of patients, such as those with core binding factor chromosomal rearrangements, or NPM1 or CEBPa mutations, for whom intensive chemotherapy is effective and potentially curative.1-3 For everyone else, the long-standing argument in favor of induction chemotherapy is that it beats the alternative, which in the absence of any U.S. Food and Drug Administration (FDA) – approved therapies is ... nothing. Generations of hematologists who spent careers banging their heads against the chemotherapy wall would certainly have traded their purine analogs in for a sleek new targeted therapy. Colleagues, the time is now upon us: I am excited to announce that the field has officially entered the postchemotherapy era. Allow me to explain.

First, we must make the case as to why there is a need to abandon intensive induction chemotherapy. For patients younger than 60 years, the complete remission (CR) rate with induction is around 70 percent, but the treatment-related mortality (TRM) rate may be as high as 13 percent; five-year overall survival (OS), the surrogate endpoint for cure, is only around 30 percent.4 Not surprisingly, given that the basic recipe for induction chemotherapy has not substantially changed in more than 40 years,5 no meaningful improvements in outcomes have occurred for decades that are not attributable to advancements in supportive care or transplantation.6

However, the problems with induction chemotherapy are more pernicious than simply its lack of efficacy. Physicians live by the credo primum non nocere; as the frightening biological impact of induction chemotherapy on AML is becoming clear, we must question whether it violates this code to “first, do no harm.” Induction chemotherapy does not appear to eliminate preleukemic hematopoietic stem cells, and clonal evolution of this population after exposure to chemotherapy during remission is a likely contributor to relapse.7,8 Induction chemotherapy provokes clonal hematopoiesis from nonleukemic progenitor cells, the consequences of which are unknown and possibly deleterious.9 Gene expression profiling studies performed on AML patients pre- and post-treatment with cytarabine revealed the activation of resistance pathways that occurred as the direct result of chemotherapy.10 Most ominous is the recent discovery of the increased number and heterogeneity of leukemia stem cells (LSCs) after induction fails and patients relapse.11 Like a zombie movie where cutting one monster in half leads to a temporary halt in the aggression, followed by the reality that the hero must now fight off two zombies, chemotherapy is an accelerant, splintering and emboldening the LSC population, making it very unlikely that the beast can be slain. In light of these reports, we must consider the reality that very often, when treating AML with intensive chemotherapy, we are not simply passive users of a therapy that doesn’t work very well, but instead, we are responsible for making this disease worse. Call relapsed AML after induction what it is: iatrogenic AML (Figure).

Historically, complaining about induction chemotherapy has been a quixotic exercise. Yes, it represents a suboptimal therapy, but it was the best choice among poor and limited options. However, the past several years have brought about a deeper and more sophisticated understanding of the underpinnings of AML, coupled with new advances in drug development. These twin accomplishments have coalesced to deliver compelling early-phase clinical trial results that may allow us to “repeal and replace” induction chemotherapy.

Vadastuximab talirine (SGN-CD33A, Seattle Genetics), the anti-CD33 antibody-drug conjugate, displayed impressive activity in elderly treatment-naïve patients who were not candidates for induction chemotherapy. With a CR or CR with incomplete cell recovery (CRi) rate of 73 percent when paired with a hypomethylator, these numbers are comparable to what might be expected from induction chemotherapy in younger patients.12 Additionally, the minimal residual disease negativity rate of the responses (50%)12 suggested the remissions were deep. Importantly, the 30-day mortality rate was 2 percent,12 which is a fraction of what would be expected if a similarly aged group would have been treated with intensive chemotherapy.13 Patients who achieved remissions could proceed to transplantation, representing a bridge to a definitive therapy in appropriate instances.

Venetoclax (ABT-199, Abbvie) is a Bcl-2–specific inhibitor with modest single-agent activity in the relapsed and refractory setting.14 However, when used in the older, treatment naïve population with either a hypomethylator or low-dose cytarabine, responses were very impressive, with overall response rates in the 80 percent range and CR/CRi rates in the 60 percent range,15,16 again compatible with what would be expected for a younger patient population in the setting of induction. Once again, tolerability was better than what would be expected for the same population exposed to intensive induction,13,15,16 and patients were able to proceed to transplantation when appropriate.

Drug companies and the FDA are tying themselves into knots trying to parse out how to identify the factors that make older patients unfit for induction. With the very promising outcomes reported with these drugs, I suggest the idea of evaluating fitness for induction is no longer relevant; no older patients should be induced if alternatives such as these exist. Additionally, I advocate going further: With the exception of those with biologically defined favorable-risk features, no patients should be exposed to induction chemotherapy, regardless of their age.

The immediate reflex when an active agent is identified in the relapsed/refractory or elderly unfit populations is to combine it with induction chemotherapy for younger patients. For both vadastuximab talirine and venetoclax, such studies are planned or ongoing. However, let us carefully consider the logic of this strategy. First, it is important to note that there is nothing about these two drugs to suggest that their efficacy would be restricted to elderly patients. CD33 does not have increased expression in older AML patients, nor is there any data that Bcl-2 is expressed more highly in the leukemia stem cells or bulk tumor of the elderly. Both have shown activity in biologically defined intermediate- and poor-risk subgroups that constitute the majority of patients aged 18 to 59 years. There are no strong data to suggest that synergistic interactions exist between these agents and intensive chemotherapy, but there is certainly overlapping toxicity in the form of cytopenias, which are a feature of both vadastuximab talirine and venetoclax. Furthermore, despite decades of use, there continues to be a lack of clarity on what the proper doses of the drugs used in induction therapy should be,17 which anthracycline to use,18 and particularly between US- and European-based practitioners, a lack of consensus regarding what drugs these regimens should even include. Finally, induction chemotherapy is prohibitively toxic, and as previously described, if it does not cure the disease (which is not expected for intermediate- or poor-risk patients), what does not kill it may make it stronger (Figure).11

Restricting the use of vadastuximab talirine and venetoclax with their hypomethylator backbones to older patients constitutes a bizarre form of reverse age discrimination. The only impediment to a trial that spares induction and offers younger adult (18-59 years old) newly diagnosed AML patients the same treatments that are so successful in elderly unfit patients is convention, and therein lies the paradox: We despise induction chemotherapy — its toxicity, its unpredictability, and its lack of efficacy — yet we show enormous fealty to this conventional approach. Within our community, it is not viewed as contradictory to inveigh against the limitations of induction chemotherapy and simultaneously proclaim it unethical to withhold it.

I believe the way forward is to design a small, pilot, noninferiority study using CR as an endpoint and using a well-accepted historical control, in which induction was employed in a younger population, as a comparator. Frequent statistical analyses (such as each time a small cohort of patients completes 1 or 2 cycles) to ensure the study is not falling behind the expected historical endpoint would be built in. If the readout showed a lack of inferiority compared to the historical control, this could be followed up with a small randomized controlled noninferiority study of the experimental combination compared with induction chemotherapy. There is precedent for this approach in acute promyelocytic leukemia, in which a noninferiority study design for a non-chemotherapy approach was found to be superior to chemotherapy.19 This may be a finding in my proposed trial design, or it may be found that the CR rate is truly equivalent, which would still be highly clinically significant because the decreased toxicity/TRM and resultant increase in suitable candidates for an allogeneic transplantation would likely result in an OS benefit, not to mention the beneficial impacts on quality of life and the cost savings from an outpatient regimen.

Significant resources, from investigators, granting agencies, and most importantly, study subjects, have been invested in attempting to improve induction chemotherapy, but we’ve now entered an era in which this could be eliminated. Perhaps it is we the clinicians who need to be weaned from induction; maybe it is the crutch keeping us limping but preventing us from running. What if we tried to replace it? How can we not?