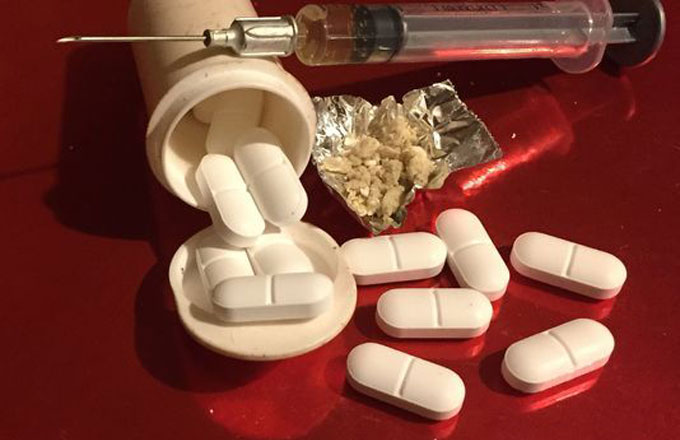 Editor's Note: This ongoing series takes an in-depth look at the heroin epidemic destroying lives in our area. From the story of the addict who could no longer get prescription opioids on the street, the health care professionals who are understaffed and under trained, the child protective services who are battling to provide safe homes for displaced children and the families who have lost loved ones to incarceration or death - these are the voices and stories of Appalachians impacted by heroin.

"It's an everyday occurrence, sometimes twice a day," ZFD Chief Eric Waltemire said. "Heroin, alone, is no longer effective for a lot of addicts so synthetic opioids, like fentanyl, are being mixed with the heroin to increase the effectiveness of the drug."

This time, the call came too late. The code signal rings out across the scanner - Translation: dead on arrival.

Heroin addiction has brewed to an epidemic across the U.S. However, the effects are more realized in Ohio, as the Buckeye state leads the nation in overdose deaths. According to state-by-state statistics compiled by the Henry J. Kaiser Family Foundation, 3,050 Ohioans died of unintentional overdoses in 2015.

In August 2016, Carfentanil-laced heroin was wreaking havoc throughout the state. In Cincinnati, emergency personnel responded to 174 overdoses in six days. Twenty-one overdoses were reported within four hours in Akron. Columbus Public Health reported 27 heroin overdoses in a 24-hour period.

Carfentanil, a sedative for large animals, is the most potent opioid used commercially. A version of the painkiller fentanyl, carfentanil is 10,000 times stronger than morphine, according to the Drug Enforcement Administration. As little as two milligrams can knock out an African elephant weighing nearly 2,000 pounds.

"Dealers have been cutting heroin with fentanyl or carfentanil to give it a boost and stretch their supply," Waltemire said.

The result is a climbing number of overdoses - many leading to death.

"Officially, I believe Muskingum County reported 23 overdose deaths in 2016," said Steve Carrell, CEO of Muskingum Behavioral Health. "In reality, I think you can double that number."

According to Carrell, not every death that could be attributed to heroin is reported as an overdose. One example of that is automobile accidents, said Carrell. The report might indicate an individual died as a result of injuries sustained during an automobile accident, however, it may have been a heroin overdose that caused the accident to begin with.

"It's an epidemic and it's not going away anytime soon," Carrell said. "Addiction does not just affect the addict and his or her family and friends, addictions affects everyone."

"We need to stop chasing the drug and address the public about addiction," Carrell said. "Until we do, the problem will exist and it will only get worse."

The face of addiction

Chasing the Dragon is a phrase referring to inhaling vapor from a heated solution of heroin or other opioid. It has become a common metaphor used to describe an addict's constant pursuit of the feeling of their first high.

According to Carrell and many professionals in the field of addiction, heroin is unlike any drug that has plagued families and communities in the past - no one is immune when it comes to heroin addiction.

"I don't care if you wear a tie, if you work in the health care profession, you're a school teacher or a factory worker, I don't care who you are, that is the face of a heroin addict," Carrell said. "That is the sad thing. This drug is not targeting the young or the poor or the depressed, it is targeting people from every walk of life."

Carrell said the age group most commonly seen is between the ages of 25 and 45 - his youngest client being 13 years old. Often, Carrell says, people are addicted before they ever use heroin the first time.

Heroin and painkillers belong to the same class of drugs - opioids. Opioids attach to specific molecules called opioid receptors which are found in the nerve cells in the brain, spinal cord, intestines and other organs, according to Carrell. When painkillers or heroin attach to these receptors, they can decrease the feeling of pain. They can also cause the person to feel relaxed and happy, creating the brain's desire to continue the euphoria.

According to a study by the National Institute of Drug Abuse, eight out of 10 people who start using heroin abused painkillers first - often unintentionally.

Often doctors will cut the dosage or discharge patients without properly weaning them from their pain medication, according to Carrell. Patients who have been using narcotic medication for an extended period of time under a doctor's care, usually for chronic pain, are suddenly faced with insurmountable hurdles to accessing medication they have become addicted to.

"Dr. Brad Lander explains addiction as well as I've ever heard it," Carrell said. "He calls it squirrel logic."

"The introduction of addictive substances or behavior to the brain triggers squirrel logic," Lander said. "This sets off a devastating chain reaction and biological transformations."

Lander said as dopamine floods the system, it produces a euphoric feeling that also prevents the body from absorbing the serotonin necessary to modify emotional response.

The brain interprets drugs and alcohol as a new environment and begins to make changes in response, according to Lander. It disconnects and reconnects some nerve cells.

"You've heard people talk about feeling pain in a foot when they don't even have a leg," Lander said. "The reality of the limb is in the brain, not in the limb itself."

According to Lander, it's very similar with addiction. Normally, opioids are the endogenous variety created naturally in the body. Once attached, they send signals to the brain of the opioid effect, which blocks pain, slows breathing and has a general calming and anti-depressing effect. Excessive use of synthetic opioids can cause abnormalities in the cortex of the brain, preventing the brain from being able to distinguish between real and imagined experiences.

Anything that stimulates the reward pathway in the brain is going to be interpreted as something that is necessary for life and needs to be repeated.

"The brain is then convinced it needs heroin the same way it needs food and water," Lander said. "Otherwise it will die."

Are you or a family member suffering from an addiction, mental illness, or both? You can find help at Muskingum Behavioral Health of Zanesville, 740-454-1266.