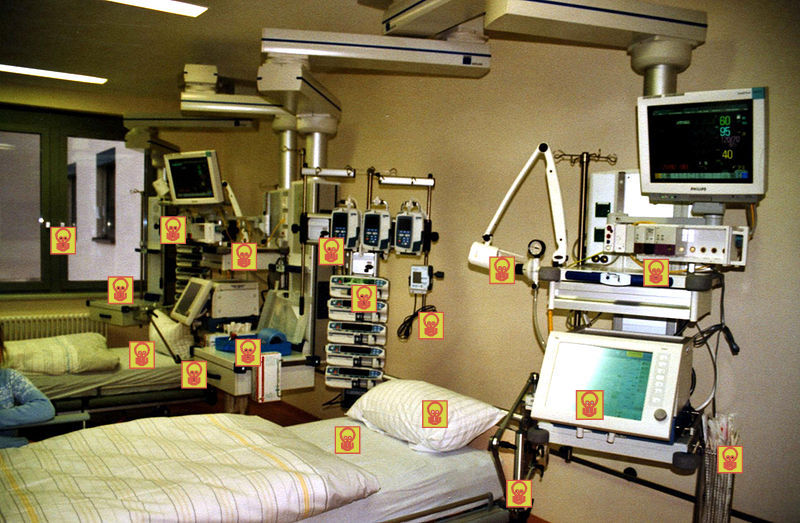 Risk factors for catheter-associated BSI in neonates include the following [1] :

Risk factors for candidemia in neonates include the following [3] :

Risk factors for VAP in pediatric patients include the following [4, 5] :

Risk factors for hospital-acquired UTI in pediatric patients include the following [7] :

The source of infection may be suggested by the instrumentation, as follows:

Patients with pneumonia may have the following:

Patients with UTI may have the following:
See Clinical Presentation for more detail.
Diagnosis

Because not all bacterial or fungal growth on a culture is pathogenic and because such growth may reflect simple microbial colonization, interpretation of cultures should take into account the following:

Methods used to diagnose and characterize BSIs include the following:

Tests used to identify pneumonia include the following:
Urinalysis and urine culture, along with clinical findings, are essential for differentiating between asymptomatic bacteriuria, cystitis, and pyelonephritis. The following factors should be kept in mind in the interpretation of urine cultures:
Most experts recommend imaging studies in evaluating children with first-time UTI.
See Workup for more detail.
Management

Endogenous sources include body sites normally inhabited by microorganisms. Examples include the nasopharynx, GI, or genitourinary tracts. Exogenous sources include those that are not part of the patient. Examples include visitors, medical personnel, equipment and the healthcare environment.
Patient-related risk factors for invasion of colonizing pathogen include severity of illness, underlying immunocompromised state and/or the length of in-patient stay.
Frequency

The incidence of central line-associated BSI and VAP declined significantly between 2007 and 2012 in critically ill pediatric patients, according to a national cohort study of patients admitted to 173 neonatal intensive care units (NICUs) and 64 pediatric intensive care units (PICUs). [16, 17] No change was observed, however, in the rate of catheter-associated UTI. In the NICUs, the rate of central line-associated BSI decreased from 4.9 to 1.5 per 1000 central-line days during the study period; in the PICUs, the rate fell from 4.7 to 1.0 per 1000 central-line days. [17]The rate of VAP decreased from 1.6 to 0.6 per 1000 ventilator days in the NICUs and from 1.9 to 0.7 per 1000 ventilator days in the PICUs.

In 2014, the Centers for Disease Control and Prevention (CDC) released a pair of reports on healthcare-associated infections, with one indicating that significant progress has been made in their prevention. [18, 19]

In the National and State Healthcare-associated Infections Progress Report, the CDC notes a 44% reduction in central line–associated bloodstream infections and a 20% decrease in infections related to 10 surgical procedures, between the years 2008 and 2012. Other decreases were much smaller, with a 4% reduction in hospital-onset methicillin-resistant Staphylococcus aureus (MRSA) bloodstream infections and a 2% decrease in hospital-onset Clostridium difficile infections, occurring between 2011 and 2012. Catheter-associated urinary tract infections (UTIs) increased by 3% between 2009 and 2012.

Both developed and resource-poor countries are faced with the burden of healthcare-associated infections. In a World Health Organization (WHO) cooperative study (55 hospitals in 14 countries from four WHO regions), about 8.7% of hospitalized patients had nosocomial infections. [20]

A study of bacteremia in African children found distinct differences in the microbiological causes of nosocomial bacteremia compared with community-acquired bacteremia. Nosocomial bacteremia resulted in a higher rate of morbidity and mortality and longer hospital stay. Because it is largely unrecognized in low-income countries, nosocomial infections are likely to become public health priorities as their occurrence increases. [22]

A report from the CDC showed that among the intensive care units in the United States, the year 2009 had 25,000 fewer central line-associated bloodstream infections (CLABSI) than in 2001, representing a 58% reduction. Between 2001 and 2009, an estimated 27,000 lives were saved and potential $1.8 billion cumulative excess health-care costs were prevented. Coordinated efforts from state and federal agencies, professional societies, and healthcare personnel in implementing best practices for insertion of central lines were thought to play a role in this achievement. [26]
Sex

Healthcare-associated infections do not have a discernible sex predilection.